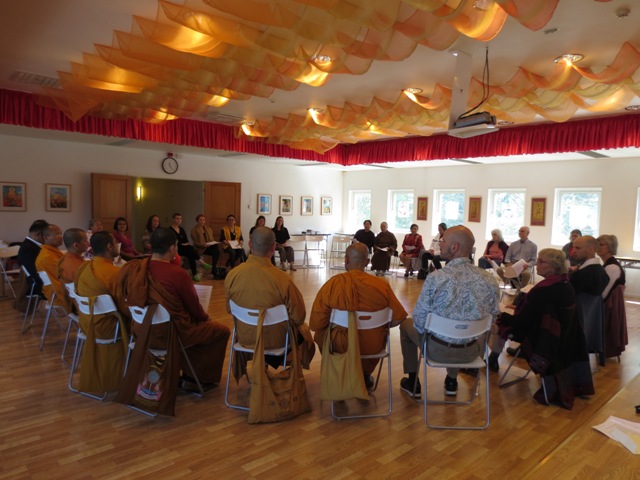 There has been practicing Buddhists in Sweden since the 1970s, and a few people even earlier. During the 1970 - 80-ies the now largest and most active organizations were founded.

In the case of SBS history and origins, we can trace it to some meetings held in 1992 and 1993, when the foundations of SBS was outlined. The first meeting was held on 14 April 1992, when representatives from four Buddhist organizations in Stockholm met and discussed the formation of a Buddhist cooperative council. They represented organizations and individuals were:

The minutes states: "It is of great value that the relationship between Buddhist organizations are strengthened. Thru cooperation there will be a greater opportunity to influence the publication of Buddhist literature, to affect the general information on the Buddhist doctrine and Buddhist activities in Sweden. A council would also be able to allocate state funding, which is given to religious movements, among the Buddhist member organizations. "

The minutes of the meeting held August 31, 1992 states: "All present expressed a positive response from the organizations they represented on the idea to form a cooperation. Specially emphazised was the importance for Buddhism as a religion in Sweden to receive state recognition and thus finacial support."

It is clear that the central purpose of the formation of SBS was to apply for public funds, but not exclusively. Also the public recognition of Buddhism and the cooperation itself was seen as very important.

From the beginning, there was a warm appreciation among the various representatives and different projects for cooperation emerged gradually. Even before the SBS formation there had been the joint celebration of the Buddhist feast of Vesak. It is also clear that in these early meetings the members were influenced by the Norwegian Buddhist Cooperation Council, which had already organized themselves and started to receive state funds.

During these meetings in 1992 and 1993 SBS was formed. Then began the process of recognition, and finally it was carried it to the desired result, in the form of state recognition in April 2005.