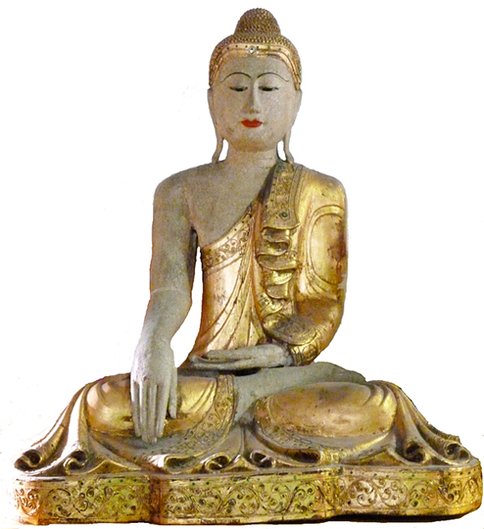 What is Buddhism? - A brief introduction to Buddhism.

The historical Buddha was born about 2500 years ago in a small kingdom (Kosala) in northern India, near the border of Nepal. His name was Prince Siddhartha Gautama of the Sakya clan. Although he had all the material wealth he could wish, he didn´t have a calm and peaceful mind. He realized that he must leave his sheltered life in the palace and go out into the world to find out what the meaning of life really is. So one night when everyone was asleep he left home and began his journey as a spiritual seeker. After several years of study he mastered various styles of meditation and ascetical practices, taught at that time, but realized they did not lead to the deep insight and understanding he sought.

At this time Prince Siddhartha was staying in the village Uruvela, which is now called Bodh Gaya in Bihar State. He sat down under a big tree to meditate. He sat there all night and when the morning star rose at dawn, he attained awakening, Nirvana, the realization of the true nature of things and then he was called a Buddha. So the Buddha is actually a title that means The Awakend One.

Buddha Gautama does not claim to have been inspired or sent by some higher power or god. He saw his wisdom as entirely human and possible for all humans to reach. It is certainly not an easy thing to achieve man's highest potential, but it's not impossible. At his awakening the Buddha was 35 years old and he spent his remaining 45 years in life wandering around the northern Indian plains teaching his doctrine, which he called Dharma (Dhamma). Many men and women followed him and became ordained as monks and nuns in the Sangha, as the Buddhist congregation is called.

Buddhism's basic world view is that all beings and phenomena in the universe are interlinked and interdependent. Buddha often spoke about nature, how it provides people with everything they need. He and his monks often lived under the open sky in different gardens that his admirers had made available. He was particularly fond of trees. "Here are trees and tree´s roots, here we can meditate ...." he used to say. According to the legends he was also born and died under different trees.

Through meditation, it is possible to turn the attention inwards towards one's own mind and observe what is really happening there. It is this that leads to insight about life. Buddhism is a religion where practical psychology and philosophy occupies a large place. In the Buddhist scriptures the human mind is mapped in a detailed and timeless way that is useful even in our time. The modern "mindfulness-therapies" originally comes from Buddhism.

After Buddha's death his teaching was spread all over Asia. It was influenced by the cultures it came to and split up into different schools.

Theravada - the Way of the Elders - can be found in the current Sri Lanka, Thailand, Burma, Laos, Cambodia and Vietnam.

Vajrayana - a branch of Mahayana which developed mainly in Tibet and Mongolia.

In the country of origin, India, buddhism was wiped out almost entirely in the 1200s because of Muslim invasions. But it has resurfaced on a small scale during the 1900s thru Dr. Ambedkars revival movement of untouchables, who, by converting to Buddhism, could escape the Hindu caste system. Theravada Buddhism has also resurfaced in India thru Mahabodhi Society's mission and resurrection of Buddhist holy sites. Also SN Goenka, a teacher from Burma, has established many centers in India. Because of China's invasion of Tibet, many Tibetan refugees, including the Dalai Lama and other esteemed lamas fled to India. This contributed to the spread of Tibetan buddhism from India to Europe, America and other continents.

To the West, Buddhism first arrived in the late 1800's, but it was not until towards the end of the 1900s, Buddhism became widely known and even practiced in the West.

Buddhism has been influenced by the cultures it came to, and can therfore, at least on the surface, show very different expressions. However, there are many common teachings in all Buddhist traditions. The key teachings are The Three Jewels, the Ethical Training Rules, the Four Noble Truths and the Noble Eightfold Path.

Buddha - the historical Buddha and also the possibility for everyone to become a awakened person.

Sangha - Sangha - the Buddhist Community, especially monks, nuns and those who have reached insight, but also the wider Sangha of all who follow Buddha's path.

I undertake to practice:

1. to refrain from killing.

2. to refrain from stealing.

3. to refrain from misuse of sexuality in a way that harms oneself and others.

4. to refrain from telling lies or using other harmful speech.

5. to refrain from abusing alcohol and other drugs that clouds the mind.

The Four Noble Truths and the Noble Eightfold Path

The Four Noble Truths are not intended as dogma but as insights into the lived reality.

1.The truth that there is dissatisfaction or suffering in life (dukkha)..

2. The truth about the cause of dukkha, which is our attachment to emotions such as desire, greed, aversion and hatred, giving rise to all kinds of negative actions.

3. The truth about the cessation of dukkha- liberation or awakening (Nirvana).

The noble eightfold path covers the whole of human life. The so-called right steps should be seen as an effort to be sincere and true to oneself and others. It is a practice of how to be a good person who tries to live a good life with his fellow beings. To live mindfully here and now where our life really takes place, not in the memories of the past or in the plans for the future. The Buddhist path is essentially an exercise to gain insight, wisdom, compassion and loving kindness, and relief from unnecessary mental suffering.

How to become a Buddhist?

If you happen to be born in a Buddhist country of Buddhist parents, you automatically become a Buddhist, just as many Swedes are expected to be Christians when they are born. Therefore, there is of course also many Buddhists who do not practice meditation or delve deeper into the teachings, just as there are many Christians who never pray or go to church.

If a non-Buddhists would like to become a Buddhist, it's not that complicated and it is a decision you take yourself. There is no test that you have to undergo, or someone who checks to see if you will do as Buddhist. For most people it is something that develops gradually after contact with Buddhist meditation techniques and teachings.

There are so-called admission ceremonies, where you formally take refuge in The Three Jewels: Buddha, Dharma (Sanskrit) / Dhamma (Pali) and the Sangha in front of a Buddhist representative. But because Buddhists are well aware that everything is changing and transient, this need not be a lifelong commitment, if you change your mind later. One can also be a Buddhist without formally taking refuge. It is often possible to participate in Buddhist meditation, teaching and retreats without taking refuge in the Three Jewels. You can take refuge for an hour, a day, a weekend or a lifetime. Even Buddhist monks and nuns are free to cancel their commitment if they find that this life form does not suit them anymore. If you want to take refuge in the Buddha, Dharma and Sangha, it is very simple. You repeat the following verses three times, either alone or perhaps most commonly with a Buddhist group, a monk or a teacher:

I take my refuge in the Buddha.

I take my refuge in the Dharma (Dhamma).

I take my refuge in the Sangha.

Often one also promise to follow the five training rules in good faith, which is to abstain from: killing, stealing, misusing your sexuality, lying and abusing alcohol and other drugs. So officially, it is these two elements that constitutes the "conversion" to Buddhism. But you can also recite the refuge and the training rules in a Buddhist context, for example, as a prelude to a ceremony or meditation, and still not suddenly involuntarily become a Buddhist. The most important element needed to become a Buddhist is ones choice and willingness to follow the Buddhist path.

What does it mean to "take refuge" in the Buddha, Dharma (Dhamma) and the Sangha?

The word "refuge" gives a feeling that we are seeking support and guidance from something that can give a deeper meaning to our lives. Refuges are, however, no articles of faith, but rather an statement of action, something to consciously and actively test and explore - in order to understand them and realize them in our own life.

The Buddha as a refuge means both to get inspiration and guidance from the historical Buddha, and that you realize that you yourself must practice the Buddhist path and come to deep insight into the meaning of life (awakening). Buddha is the leader and guide, who taught the way to others, so that they could realize it for themselves.

Taking refuge in the Dharma (Dhamma) implies a commitment to studying and practicing Buddha's teachings. Dharma is a word with many meanings, foremost it means the Buddha´s teaching, the way and the truth. A characteristic of the doctrine is that it is a tool, a method to use. The methods vary in the Buddhist traditions, but various forms of meditation is the most common way to explore and understand the body and mind and the so-called external world, which opens the possibility of awakening.

Sangha means the Buddhist congregation and community. Taking refuge in the Sangha means to value the guidance and inspiration you get from the ordained sangha (monks and nuns), teachers, sanghaleaders and the tradition. But also to support each other in our practice and in daily life. One does not need to become a monk or nun to be a serious practicing Buddhist. The ordained sangha is very important in the Buddhist world, but it also depends on a very active and supportive lay community. Even in Buddha's time there were enlightened laymen and women, which has not always been emphasized.

In summary one can say that a Buddhist is someone who takes refuge in The Three Jewels, who endeavors to follow the five training rules and usually practicies some form of meditation and who supports his sangha through generosity and good will.